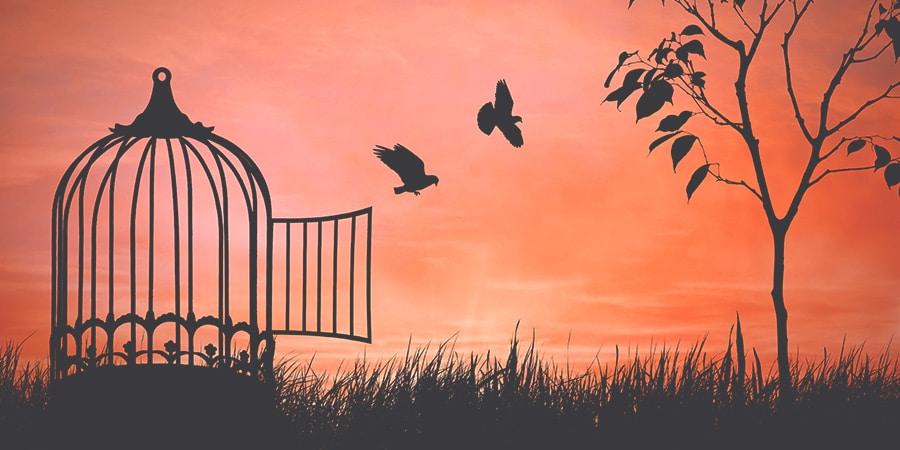 Even the thoughts of individuals are being controlled and regulated..where is freedom?

Freedom is an innate desire of any living being. If you put a bird in a big cage, it madly flies and strikes the walls of the cage and on finding any opening, frees itself and flies out. Similarly, if you put any wandering dog or a cat in a room it reaches for the door and scratches to open it. Freedom, Liberty, Independence refer to an absence of undue restrictions and an opportunity to exercise one’s rights, powers, and legitimate desires, or the like. Without a doubt, everyone supports the concept of freedom.

The word “Freedom” can be viewed from different perspectives. Broadly speaking, freedom can be divided into three major segments, which are, National Freedom, Political Freedom, and Individual Freedom. These three can further be expanded and divided into different parts.
National Freedom is at the highest in hierarchy, which simply means independence of a nation from foreign rule. Almost all nations want independence and are willing to fight for it, even if their own people are corrupt or the leaders are evil. Political Freedom has further divisions, though it literally means the right of citizens to choose their government; but it further goes on to freedom of speech or conscience, freedom of press, etc. Individual Freedom is the most sensitive and most sought for among all other forms; This is further divided into many shades including; individual rights and liberties given in constitutions, religious freedom, freedom to acquire education, children and women rights, rights of minorities etc. It is all about owning one’s life. Sometimes different forms of freedom are combined to name these as collective freedom or social freedom or public freedom. It is because freedom of one individual is always linked with the community.

Since the beginning of time, stronger animals and then stronger men and nations have been in charge of the world activities and had subjugated the weaker nations. Recorded human history is full of stories of human slavery and captivities on individual and collective scales. Human beings were sold like other commodities. These human slaves were forcefully deployed on manual labor to build palaces of kings, pyramids for Pharos, colloseums of Rome or driven to row big ships for transatlantic and pacific voyages.

As the capacities of human thought expanded and developed, societies were formed and human fears reduced through enforcement of human or divine laws. But tragically, the desire to control other human beings and weaker nations did not vanish but it changed shapes.

A large number of writers gave different concepts towards controlling people. Generally, all of them were of the opinion, that while forming a government people enter into a contract with the society or the government by which they have to abide by the laws and in return they are provided different life protections, like a child is protected in home by parents. But these concepts were stretched beyond acceptance and a number of philosophies of control emerged turning it to a war of state with the people and vice verse. Niccolo Machiavelli’s book “The Prince” defined citizens and crafted rules to help rulers. The book “The Plato’s Republic”, explaining how to steer man by the governments, Or “Propaganda” written in 1928 by Edward Bernays, nephew of Sigmund Freud, provided strategies to shape and manipulate public opinion by systematically enslaving them. The book “Tragedy & Hope”, by Carroll Quigley written in 1966 explained how one system can fund so many and spread its own collectivism and bring new world order that is completely biased to specific goals. Or the book “Open Conspiracy” written in 1928 by British Psychological warfare expert H. G. Wells gives similar concepts. George Orwell’s book written in 1948 titled “1984”; in which a Big Brother totalitarian state maintains the control of society by a massive surveillance system incorporated through a panopticon, presents a society where even the thoughts of individuals are being controlled and regulated through an illusory police force.

The long term effect of all above types of control concepts is too devastating. The self reliance and independent capacities of individuals and nations are completely diminished and paralyzed. Like German Philosopher Hagel said “We can engineer the individual’s choices by manipulating his needs”. Men and nations then become fearful of losing the life they are living and thus are enslaved. Very rightly said by (probably) Mohsin Naqvi:
جنہیں سونے کے پنجرے میں غذا مل جاۓ چاندی کی – انہیں پھر عمر بھر آزادیاں اچھی نہیں لگتیں

Even the most modern education systems of the world are designed to discipline the children and students so as to make them subservient workers. The award-winning educationist and author of a number of books, John Taylor Gatto, through his books like “The Underground History of American Education”, and “Weapons of Mass Instruction”, etc frighteningly discovered the enslaving approach of the school curricula. The problem is; there is no escape. Education has always been used to control human beings and human behavior.

Considering Spiritual domain of Freedom, Men of God have always sought freedom from bodily desires. Willful self-enslavement is sometimes a source of inner peace and satisfaction. We, the Muslims, voluntarily fast in the month of Ramadan or even in other days and refrain from eating or drinking to attain spiritual enlightenment and freedom. In other religions, people enslave themselves to become nuns, monks, hermits; this is a way of restricting the freedom of their physical needs. Even sometimes, Love is defined as surrendering one’s will for others. Spiritual Freedom is those beliefs and thoughts which exist in the hearts, minds and souls of each individual. Such beliefs are deep-seeded and can never be taken away by anyone. However, history is full of stories of a ruler trying to control Spiritual Freedom. The Spanish Inquistion and Hitler’s death camps are the examples.
Maulana Jalaal ud Din Rumi, the greatest of teachers, narrates a story for true understanding of the concept of freedom. The story goes like this: There was a merchant who while going to China asked his family as to what they wanted him to bring from China. Everyone gave his demand. He asked his parrot, Mithhu, what he wanted from China. The parrot sadly said “Tell the parrots of China that you are enjoying a free life and I am confined to a cage”. The merchant, after the round trip, brought back the gifts for everyone. To the parrot “Mithhu”, he said; there was a bad news. When the merchant gave Mithhu’s message to the parrots in China, one of the parrots fell from the tree and died. On listening that, Mithhu fell in the cage and died. The merchant sadly took its body out of the cage and placed it on the side. Mithhu flew and sat on the wall. Merchant got upset and said; Mithhu! It was not fair; “you tricked me”. Mithhu said; Not at all, “I did not trick you”. There was a message in it for him. Merchant asked what was that? Mithhu replied, “If you want to be free in life, Play Dead”.

We are so strongly attached to our material possessions that we hardly share or give away even the most unwanted of our THINGS. But then a time comes when we have to leave this world; leaving the most sacredly loved belongings, for others. For a true freedom we need to disconnect ourselves from material possessions during our life, by Playing Dead.

The concept of freedom never goes alone; it is always connected with the words like Equality, Empathy, Compassion; more specifically in Islam Freedom and Equality always go together. Last khutbah of Prophet Muhammad (Peace be upon him) gives the details of freedom and responsibility.
We must understand that being free always means being responsible: A type of freedom that respects the other. It is a type of “public” freedom, not the selfish individualistic freedom. We need to be empathetic while being free. Abusing and showing off one’s wealth, one’s family status, or the self, or other powers, is not the real freedom. Freedom is based on the principle of – No harm to others.
مناؤ جشن ِ بہاراں اس احتیاط کے ساتھ – کسی چراغ کی لَو سے کسی کا گھر نہ جلے